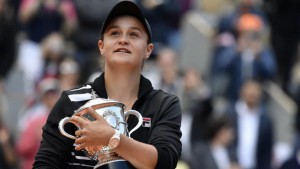 Congratulations to Ash Barty on winning the 2019 French Open.

The win has propelled Barty to number 2 ranking in the world joining Naomi Osaka who has been number one since capturing the Australian Open earlier this year. They have won the last three women’s grand slam tennis events between them. And doing so with the help of Perana Sports’ own TennisStats app.

TennisStats gives coaches and players significant advantage when it comes to analysing players own game and devising game plans against their oppositions.

Head coach of Australian women’s tennis, Nicole Pratt, describes TennisStats as a game changer and is revolutionising the way tennis is coached and played.

The Australian Federation Cup team will be playing against France in the final later this year. And once again TennisStats will play a big part in helping Australian coaches and players preparing for this important occasion.